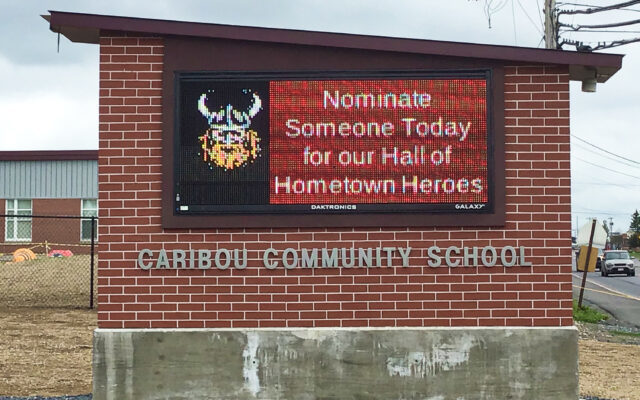 CARIBOU, Maine — Caribou Community School will launch Hall of Hometown Heroes to honor Caribou elementary and middle school graduates who’ve stayed local and contributed to their community. A ceremony to initiate the project will be held on the afternoon of July 29, along with tours of the new school.

After 10 years and $54 million of investment into the school, which finally opened last November, administration and staff hope that not only will the Hall give students an idea of the opportunities there are for life and work in Caribou, but that it will also be a way to honor the community that’s given so much for the school’s development.

This month, the HHH Committee hopes to induct 20 people into the Hall. Vinyl posters will line the walls near the front entrance of the school, with each person’s picture, details of their contributions to the community, and the name of the elementary and middle schools they attended.

Starting sometime next week, members of the community will be able to nominate people they think should be honored as Hometown Heroes using a form on RSU 39’s website. Nominees must have attended both elementary and middle school in Caribou, be 10 years out of high school and have worked in Caribou for at least five years. A separate committee of Caribou locals will evaluate nominations and select who to include.

While the initial target is 20 inductees, the HHH Committee envisions filling up the school with posters through the years — the only limit is space.

The project’s first goal is to show students all the different things they can aspire to in their community. With outmigration continually draining Caribou’s population, committee members agreed that it was important to display the many paths to and definitions of success within the city.

But beyond being an inspiration for the school’s students, the HHH Committee wants to show that just as the community-made an investment in the school, the school is committed to investing in the future of the community.

“We are losing so many students out of state, that we need to take a look at what we have here and what our school systems groomed and produced — we have these amazing people surrounding us,” Principal Lee Caron said. “There are many walks of life here and we want to let our kids know there are many opportunities for them just waiting right here in this community.”The idea for the Hall of Hometown Heroes began years ago, when eighth-grade teacher Kim Barnes toured another school with a similar project — she said she knew right away she wanted to bring something like it to Caribou.

At the time, the K-8 Caribou Community School was still under construction — it wouldn’t open until November 2020, a decade after the project began. In the months that followed its official opening, the school has remained relatively closed off to outsiders as a precaution to COVID-19.

Since the building officially opened, Barnes said she has yet to make an errand run without being asked when the public will be able to tour the building they spent so long investing in and anticipating.

On top of the long wait and financial burden, the addition of the Caribou Community School — which combined the local elementary and middle schools — brought about complex emotions for many in the area. The HHH Committee wants the project to pay tribute to the history of schools and educators that came before.

“There were a lot of broken hearts to see Teague Park go down, Hilltop get changed into a senior citizen complex, and then to see the Caribou Middle School come down as well,” Assistant Principal Travis Barnes said. “People had memories in those buildings.”

Creating an awareness of the connections between Caribou’s past and present is not only a feel-good idea, Barnes said, but it’s essential for students to respect their community and the people who came before them.

The ceremony to officially open the school, initiate the Hall of Hometown Heroes, and finally give tours to community members will begin at 3 p.m. on July 29. Tours will commence afterward, and continue until 6 or 7 p.m., depending on interest. People with questions about the Hall of Hometown Heroes or ceremony may contact Caron directly via email.